I have had the pleasure to be around a great number of championship ceremonies and “medal ceremonies,” where sports champions have their gold and silver medals draped around their necks after a winning season.

Many coaches work with their students for many months, if not years…often starting before the students enter high school and spend incalculable amounts of hours working and training their kids which help them to reach their ultimate goal.

But I had a very unique experience when I and several representatives from Astound had the pleasure of attending the EPSEL Awards Ceremony this past week.

Astound was the sole sponsor of this year’s eSports league competition, which featured 15 different school districts in our coverage area and had 30 different teams participating.  The event was the Rocket League soc cer event, complete with student-athletes competing in virtual race cars.

The trophy and gold medal ceremony was held at Parkland High School in South Whitehall Township, which was appropriate since the Trojans had been one of the first to have an organized team…

And, for the second year in a row, they captured both the varsity and the JV level championships. 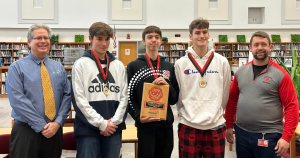 But when student-athletes, whose ages ran the gamut from freshman to senior levels, met at the Parkland High School conference center to get their medals from their head coach, they did something I had never before seen at a medal crowning ceremony…

They introduced themselves to each other!

The middle ceremony was the first time the participants actually got to meet each other in person and in fact, this was the first time that their head coach had seen his students face to face. Through the miracle of the internet, all previous conversations and meetings were done online.

Such is life for the most successful program of the hottest sport in the world right now.

These students worked together this past fall competing amongst the other best programs in Eastern Pennsylvania.  They did not discuss strategies in advance, they did not game plan each event and they didn’t even know their teammates’ real names.

But, to quote one of these athletes at the ceremony, they were “just that good.”

Truly, they were and enabled themselves to come up with a winning formula on the spot each time, culminating with a defended league championship.

In April, they will embark on a six-week state championship competition.  The finals are tentatively slated to take place at Harrisburg University near the state capitol.

But the other certainty is that eSports is here to stay and the ways and methods that student-athletes use to capture a title now-a-days is not like anything we have ever seen before.